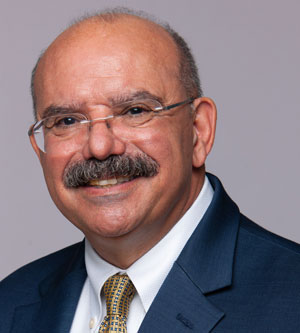 College of Engineering and Computing

Prof. Volakis is the Dean at the College of Engineering and Computing at Florida International University (FIU). He is an IEEE, ACES, AAAS, and NAI Fellow. Prior to coming to FIU, he was the Roy and Lois Chope Chair in Engineering at Ohio State and a Professor in the Electrical and Computer Engineering Dept. (2003-2017). He also served as the Director of the Ohio State University ElectroScience Laboratory for 14 years.

His career spans 2 years at Boeing, 19 years on the faculty at the Univ of Michigan and 15 years at Ohio State. At Michigan, he served as the Director of the Radiation Laboratory at U of Michigan (1998-2000). Prof. Volakis has 38 years of engineering research experience, and has published over 425 journal papers, 900 conference papers, and over 30 chapters. In 2004, he was listed by ISI Web of Science as one of the top 250 most referenced authors, and his google h-index=71 with nearly 26000 citations (as of Jan. 2021). He has mentored 95 Ph.Ds/Post-Docs and has written with them 43 papers which received best paper awards.  His research is in electromagnetics, RF materials and metamaterials, antennas and phased array, RF transceivers, textile electronics, millimeter waves and terahertz, EMI/EMC as well as EM diffraction and computational methods. He is also the authors of 8 books, including the Antenna Handbook, referred to as the “antenna bible.”